It is basically a more advanced version of the German Enigma machine, but the KL-7 has eight rotors, seven of which are moved in a complex irregular stepping pattern.

The machines came in several variations and were used by the US Army, Navy, NATO and Foreign Affairs for many years. 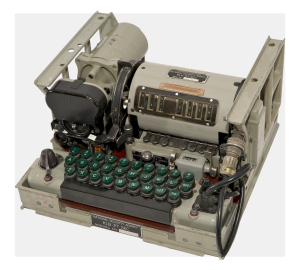 Unfortunately, KL-7 is still a classified item and only few of them have survived. Most machines that are on public display today, have been ‘sanitized’ and all wiring has been removed.

RACE (Rapid Automatic Cryptographic Equipment) is an off-line cipher machine, developed by Standard Telefon og Kabelfabrik A/S (STK) in Norway in the late 1970s, as one of the successors to the ageing KL-7.

RACE was the first high-end cipher machine were the cryptographic algorithms were purely implemented in software.

The algorithms were stored in PROMs and the machine was constructed in such a way that up to five algorithms plus a test-program could be installed, simply by adding banks of PROMs on one of the machine’s circuit boards.

Each algorithm, or PROGRAM as it was called, could be selected from the 6-position PROGRAM SELECTOR at the front panel. 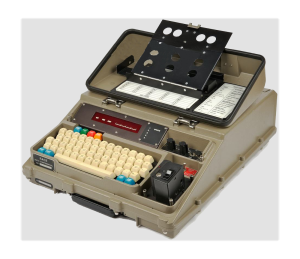 EPSOM is the default program, which is present on all NATO/RACE and US/KL-51 machines. It is compatible with the NATO CEROFF standard. Messages created in this mode are formatted in 5-letter groups according to NATO’s ACP-127 standard, just like on AROFLEX. It is approved for all levels of classification.

DERBY was the Norwegian national CEROFF standard, which is similar to but not compatible with EPSOM. Is was probably only released to the Norwegian Armed Forces and national organisations. It supports two cryptografic keys, each of which provides full message protection, with special features for exclusive messages. It was approved by NATO for all levels of classification.

ASCOT is a special program for man-to-machine and machine-to-man communication. It allows the use of One-Time Pads (OTP) or the interoperable pocket size PACE encryptor at the other end. ASCOT was also released to foreign RACE customers.

EDITA was the so-called EDIT ASSISTENT that was developed to help the operator when preparing a punched message tape for ON-LINE transmission. EDITA was also released to foreign users.

Although the KL-51 was developed during the early 1980s, some units were still in use in the late 2000s. In 2006, the US Navy was developing plans to gradually replace the remaining KL-51 units with a more modern device that could be integrated with the latest complex data networks; a possible candidate for this replacement is the KIV-7. 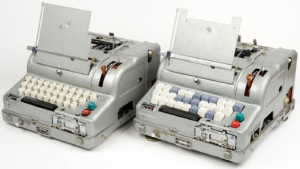 The M-125, codename Fialka, was an electromechanical wheel-based cipher machine, developed in the USSR and was introduced in 1956 and soon became one of the favorite machines of the Warsaw Pact and some allied nations, such as Cuba.

The machine is similar to the American Sigaba, the KL-7 and the Enigma. 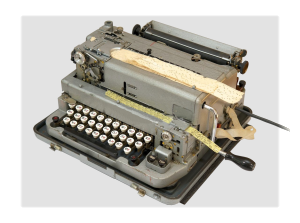 At the heart of each Fialka machine is a drum with 10 different electromechanical cipher wheels or rotors, that move in an irregular manner when entering a message. Each wheel has 30 contacts at either side and is identified by a letter of the Russian alphabet.

The M-105, codename: AGAT, was a Russian off-line cipher machine that was developed and built in the USSR in the late 1960s. The machines were used by all countries of the Warsaw Pact and the encryption is due by a built-in key tape mixer that was fed with an 11-level punched paper tape with random data. 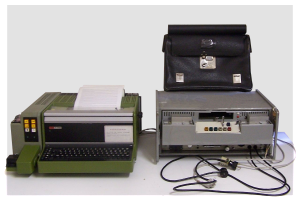