On the first day of hostilities of the World War I, the British cable ship Telconia located and cut Germany’s transatlantic cables, forcing them to send all their international traffic via Sweden, American cables or wireless communications, and the German forces then started to encrypt their communications in an attempt to prevent hostile countries from reading them, but soon all German traffic was routinely routed to Room 40, the Royal Navy’s cypher organization. 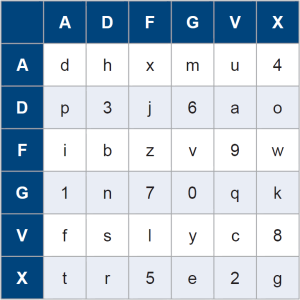 The ADFGX Cipher, conceived by Colonel Fritz Nebel of the German Army, was first put to practical use in 1918. It involves the writing of five letters, ADFGX, in a column and a row, and replaces a character with two characters, and the encryption method is essentially the same as the Uesugi Cipher up to this point. The distinguishing feature of the ADFGX cipher, however, is that the resulting series of letters is then ciphered again, this time by a transposition cipher method. The ADFGX Cipher was subsequently improved by using six characters, ADFGVX, instead of five, in order to make it easier to identify this cipher when messages were transmitted via Morse code.

Towards the end of WWI the head of cryptographic research for the US Army Major Joseph Mauborgne introduced the concept of a code based on truly RANDOM keys. This would take the form of two identical pads printed with lines of randomly generated letters. Using the Vigenere technique, each page is to be used to encrypt and decrypt ONE message and then destroyed; introducing the concept of the one use key.

The weakness of the Vigenere square was the repetition of the key. This new technique injected the same randomness into the cyphertext as was contained in the key and there was therefore no useable pattern or structure within the message. Attacks seeking to exploit these weaknesses such as the Babbage and Kasiski tests, would fail.

A key length of as little as 21 letters meant that a Key Exhaustion attack, the cryptographic equivalent of Custer’s last stand, would require the testing of 500 x 1027 keys and even then multiple decrypts may all appear plausible.

This method is still in use today, called the One Time Letter Pad or OTLP, and is used for encrypting the most secret of communications. OTLP is still the only ‘admitted’ system to provide the ‘holy grail’ of cryptography of perfect secrecy.